Tis’ The Season: “Gremlins” and the Power of Horror

Posted on November 29, 2018 by Anthony_Perrotta

One of the joys of my teaching career is that I’ve had the privilege to take my fandom of all things movies and pop culture and translate that into a legitimate study of media literacy all while working to empower students to produce digital media works that are expressive of who they are. As such, although I’ve been teaching for nearly 14 years, it’s really doesn’t feel like I’ve worked at all. My days are filled with the pleasure of either working with students directly in the creation of media artifacts or writing about film and and the empowerment of personalized education through media.

In regards to being a cinephile, one of my deepest joy is sharing my memories of youth with my students. As such, my students within the context of legitimate study of genre and film academia have been engulfed in my 80s cinematic consciousness. E.T, Raiders of the Lost Ark, Gremlins, The Burbs’ and so many others. In passing on such film bible works, the hope is that students can appreciate movies as time capsules; reaching back into a particular time to reflect on a shared sense of culture. This in essence is the power of genre as it provides for rich cultural dialogue in relation to both the past the present.

This was the sentiment shared with me by legendary filmmaker Joe Dante. Earlier this month I had the privilege to Skype with Mr. Dante about all things horror, movie fandom and his classic works. The conversation was a free education in genre and movie going itself.

Inspired by that conversation, here is a classroom lesson on horror and Joe Dante’s classic Gremlins. Gremlins is a great in-class watch for the Christmas season that provides for a rich understanding of media literacy as study of meaning and purpose and a reminder that the genre of horror is so much more than gore and violence. Horror, is a great enabler of critical voice and when leveraged by students can allow for an active exploration of self and their world.

This lesson is suitable for Gr. 9 to Gr. 12 students. Feel free to use and modify as needed.

Teacher’s Note: In working to cultivate a “minds on” opportunity to reflect, its important to understand that popular film is very much a reflection of our shared sense of self. As such, genre filmmaking as mythology rises from the political. Genres, provide learners with an opportunity to understand the evolution of cultural values at any particular time and offer insight in a shared cultural experience. In regards to film horror, the genre as a product of post WW1 storytelling rises from a direct cultural sensibility. To understand horror is to be cognizant of what is horrific in the real world and the pressing idea that horror films either mirror, reflect or challenge that said horror.

The following is an incredibly pressing read published in the Toronto Star that grounds the origins of horror cinema within the history of World War 1. How the First World War Created the Horror Genre

For further background, watch the video below of Prof. Anne Lancashire, professor Emeritus from the University of Toronto. In this video Prof. Lancashire speaks to the notion that popular film “rises from the political.”

Watch the film in class 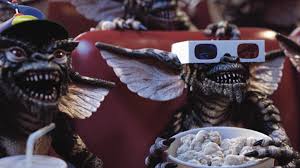 Post-screening, have students in small groups or individually read the following article from Nightmare from Film Street and/or watch the videos below, which highlights the films and sensibilities of Gremlins director, Joe Dante.

With an elbow partner, small groups or as a large group, have students reflect and share:

With the goal to consolidate and personalize learning, have students “show what they” know through a multi-modal context. This activity promotes the practice of multi-literacy and empowers students to reflect on who they are within the framework of genre.

Leveraging the meaning and tropes of the horror genre, have students produce a one-minute video, teaser trailer or short film (3-5 minutes) that speaks to a current anxiety. This anxiety can be personal or speak to a greater sense of culture and the political.

Individually or in small groups, students can shoot video with personal devices if classroom technology is not available and can use online editing software including WeVideo if in-class applications are not available.

The following are student exemplars produced in my Gr. 11 and Gr. 12 Communications Technology classes.

The Decision: This 1 minute short film speaks to the pressures of post-secondary applications and the voices and stresses students feel at this point in their life. Students produced this film with the use of an iPhone 6 and leveraged Adobe Premiere Elements for editing.

Undead: This short film pays homage to the works of George A. Romero and leverages the tradition of the zombie film to shape a narrative about the fragmentation of humanity and civil society. Students used a basic Canon HD camorder for this production and replaced all dialogue in post as microphones were not available. The film was edited using Final Cut Pro.

Abigail: This teaser trailer works within the context of genre tropes and speaks to students critique of “safety” and the idea that evil lurks. Students used a basic Canon HD camcorder for this production with dialogue being captured with a mini Lavalier Lapel Microphone. The trailer was edited using Adobe Premiere Elements.